Just outside Stykkishólmur there is a small island called Þórishólmi. The story goes that in the old days a man called Jón Sigurðsson from Dældarkot vent fishing there a caught a mermaid, whose name was Thora. Jón immediately fell in love with her and wanted to take her with him. They agreed that she would stay with him, but for three years only and after that time he would have to let her go.

Jón kept his promise and after three year he set Thora free where he had caught her. They had however had one daughter together her name vas Thorunn and she stayed behind with her father. From that we can safely say we have many descendants of Thora the mermaid living around Breiðafjörður today. 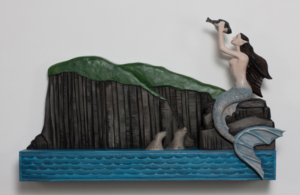