Once upon a time a deacon who lived at Myrká, in Egafjördur was in love with Gudrún. Gudrún lived in a farm on the opposite side of the valley, separated from his house by a river. Shortly before Christmas he rode out to the farm and and invited her to join the Christmas festivities at Myrká, promising to arrive on Christmas Eve. It was dangerously icy outside with some parts of the river beginning to thaw. The deacon rode back home over the ice, but it broke under him and he was drowned in the river below. The next morning a neighboring farmer saw the deacon’s horse without a rider and found the body of the deacon on the river bank. He was buried in the churchyard a week before Christmas.

On Christmas Eve the swollen river subsided and Gudrún dressed in her best clothes. She heard a knock at the door. A maid opened the door, but saw noone there. Gudrún rushed down and opened the door. The deacon, without a word, placed Gudrún on his horse and mounted in front of her. They rode to the frozen river. The horse walked onto the ice and leapt over the black and rapid stream which flowed in the middle. The head of the deacon fell forward, so that his hat fell over his eyes, and Gudrún saw a large patch of bare skull gleam white in the midst of his hair. A cloud moved away from the moon, and the deacon said:

At Myrká, the deacon told her to wait for him as he tended his horse. Gudrún saw an open grave in the churchyard, ran to the church porch, seized the rope, and tolled the bells . She felt someone pull at her cloak and tear it away. Turning round, she saw the deacon jump into the grave, cloak in hand. Heaps of earth on both sides fell in over him. The villagers came and Gudrún got shelter at Myrká.
That night as she lay sleeping the deacon rose from the grave and tried to drag her away. This was repeated every night for two weeks, and Gudrún could never be left alone or the goblin deacon might snatch her. A neighboring priest came and sat on the edge of her bed, reading the Psalms of David to protect her. Nothing worked until they sent for a man from the north country, skilled in witchcraft, who dug up a large stone from the field, and placed it in the middle of the guest room at Myrká. When the deacon rose that night and came into the house to torment Gudrún, this man seized him, and by uttering potent spells over him, forced him beneath the stone and exorcised him, so that there he lies in peace to this day. 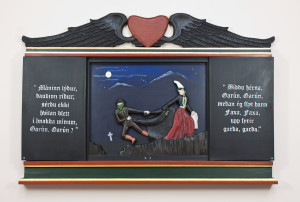 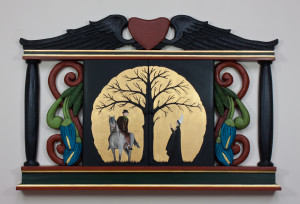