Long time ago in the east of Mýrdalur a man went along the cliffs on the seashore late one evening. He came to a mouth of a cave and inside he heard the sound of merrymaking and dancing. Nearby he saw many seals’ skins. He took one of the skins, brought it home and locked it in a chest.

The next morning he came again to the cave. There sat a young and pretty woman who was naked and cried desperately. She was the seal whose skin the man had taken. He let her dress herself, comforted her and brought her home with him. She became attached to him, but did not get on with others. She often sat and looked at the sea.

Some time later the man married her. They lived in harmony and had children together. The farmer kept the seal’s skin locked up in the chest and had the key with him wherever he went. Many years later he went to celebrate Christmas with his people, but his wife was ill and could not go with them. While he changed his clothes, he left the key in a pocket of his everyday wear. When he came back home, the chest was open, and both the woman and the skin disappeared.

She had taken the key, looked into the chest out of curiosity and found the skin there. She could not resist the temptation, bade farewell to her children, put on the skin and plunged into the sea. And before she went into the sea, they say, she whispered:

The story goes that the man grieved much for his wife. Afterwards, when he went fishing, a seal often swam round his boat, and it seemed that tears ran from her eyes. Ever since, that man always had good catch and was lucky.
When their children went to the shore for a walk, people often saw a seal that swam in the sea not far from them, both when they were on land and near water, and threw fish and nice sea shells to them. But their mother never came back. 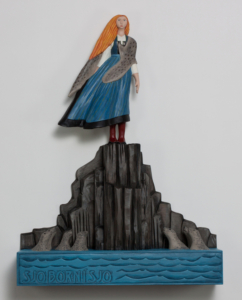